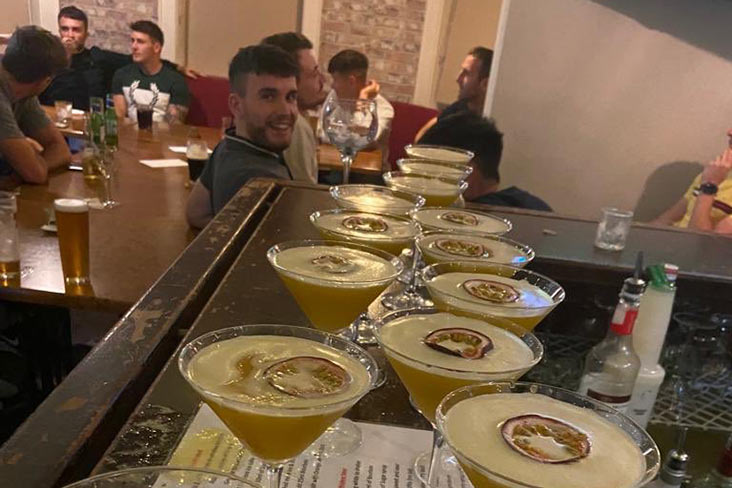 When the Gaoth Dobhair team get permission to have a beer or two pic.twitter.com/V9VQeiilPq

Reffed an adult ladies game tonight, in @ArmaghLGFA. First half heard a Ballyhegan girl run past shouting "Mum, mum pass!" 2nd half and a Clans girl roars "off your shoulder Ma!" Two sides, mothers and daughters. Great game of football too @LadiesFootball @20x20_ie

@monaghangaa i might be breaking a golden rule in GAA but sure 2020 is a strange year. What I witnessed today by referee was dangerous, disgraceful and dishonest. Don’t let any other team suffer in the same way. Assign your Top referees to the big games

When @EoghanieNolan95 is scoring points from 45 yards ya know it gonna be your day 😉 fair play to the shels. Form team of championship. Quick mention of my backwards namesake on the whistle. He was anonymous. Did a great job.

Some goal by @shelmaliers - defence to attack in a matter of seconds. #ruthless #wexfordgaa

Never one to neglect the scoring exploits of a corner back we can now clarify that a point recorded as scored by Conor Hearne of Shelmaliers went to the swashbuckling Jody Donohoe instead! Thanks to the dozen members of the extended Donohoe family for the messages! 😁

Nice sideline finished in a point by Glen Malone for @shelmaliers to open the Wexford Senior Hurling Final! pic.twitter.com/UeB964F5JJ

This is actually sad 😢 https://t.co/ZKiqk5HTVg

Such a pity the @Templenoeabu supporters couldn’t enjoy this historic win with the team. 👏🏻👏🏻👏🏻 https://t.co/wWr3Wz51wQ

When I went down to Dingle to meet the great Micheal O’Muircheartaigh for his 90th Birthday for the 9 News on Thursday, I filmed this little video. Grew up by the Sea myself but Kerry is Special 💕 ⁦@rtenews⁩ ⁦@Kerry_Official⁩ ⁦@RTEgaa⁩ ⁦@TheSundayGame⁩ pic.twitter.com/3ZhavDiQFG

Huge win for @DrCrokesGAA tonight.
Found a way to win despite all the challenges .
Great spirit boys #crokesabu #wearetheboys

"Today's performance will really improve the lads and increase the belief they have- and they have big belief"@GAALucan manager Sean McCaffrey spoke to Dubs TV after their #DSHCA Quarter Final win over Kilmacud Crokes earlier.

"I think these players were doubted unnecessarily in the last couple of weeks. We're not gone away & they wanted to show that today..."@CualaCLG manager Willie Maher spoke to Dubs TV after their #DSHCA Quarter Final win over St Brigids.

Ah, here's why the GAA had to go behind closed doors... oh, wait 🤔🤔🤔
Good to see it in black and white @MickFoley76 pic.twitter.com/uxeSeu0cXV

Champo off In kildare now until after the inter county. How do they know if inter county is going to even go ahead. What are the club players supposed to do now ? 🤔🤔🤦‍♂‍🤦‍♂‍

Thanks everyone for the birthday wishes. Had a great day with the people who mean the most to me. Joining the 30 club isn’t the worst feeling when I have these people about. #Family #McHughs #30 #AnotherYearOlder @… https://t.co/6yLn5vgGjQ

Typical @KatieTaylor lifting the energy of the Irish people in such a tough time by doing what she does best.💚